Filet of Fish in a Foil Packet (or Chicken) 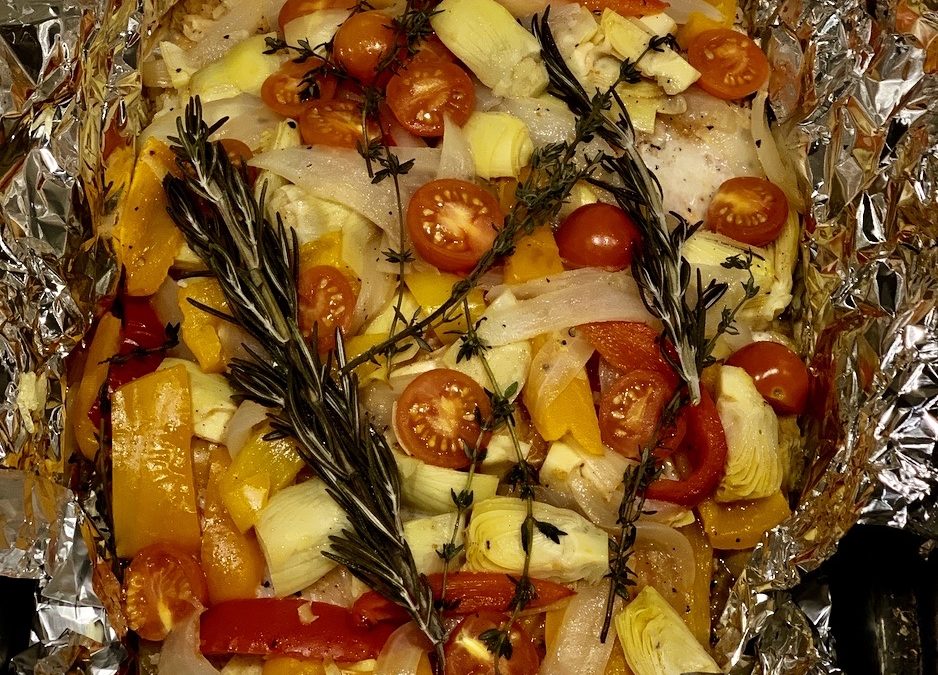 If you’re looking to jazz up your regular whitefish dinner, look no further!  I was inspired to create this delicious dish a few years ago, after seeing it at a restaurant.  Someone else at my table ordered Fish in a Foil Packet, but I did not taste it because the restaurant could not confirm if the dish was Gluten Free.  As is typical when I see something in a restaurant that I cannot taste, I go home and take a stab at it myself!  I definitely changed things up though by adding colorful bell peppers, artichokes, and herbs.  Plus I include rice right inside the packet to soak up all the amazing flavors of the sauce.

It’s important to cook the rice al dente, otherwise it will turn to mush as it continues to cook in the packet.   So I prepare the rice then set it aside while the veggies cook.   I start by sauteing the peppers and onions until they turn a light golden brown.  Then I add the artichokes, wine, chicken broth, and the juice from a can of diced tomatoes.   Now the fun begins!

It’s time to layer the ingredients inside the foil packet.  I have made this as individual packets for each person, and more commonly one large packet to feed the whole family.  The rice is the base layer, followed by the fish that is then topped with the veggies and sauce.  You can use any white filet of fish of choice.  I usually use cod or Halibut (Skin removed).  Next, I add fresh cherry tomatoes and herbs.  I often add clams and scallops on top although not pictured in this post.   Close the tinfoil to create a nicely sealed packet.  The packet can be cooked in the oven or on the grill.

Serve this dish with a nice dry white wine and enjoy! 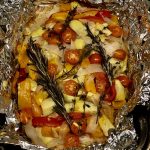 Fish Fillet in a Foil Packet